What is your best sorghum forage variety? 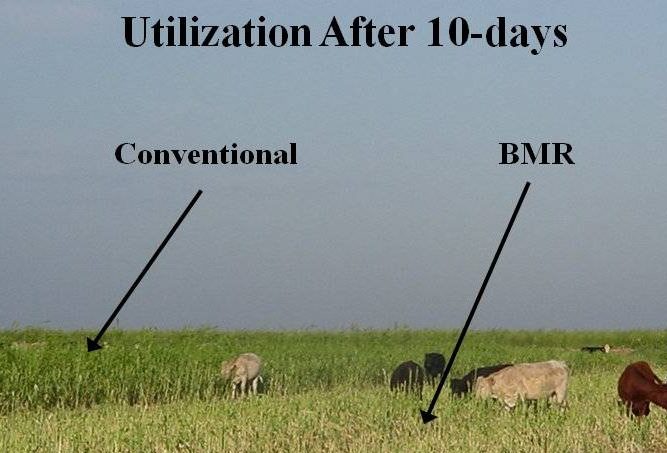 Over most of my career, I actually did not get this question. I was usually asked, “What is the cheapest sorghum you carry?”. I am glad we are to the point where most people realize the cheapest product on the price list is likely not the most profitable.

If there was one sorghum that did everything better than all the other varieties, we would only carry that variety and forget about all the others. But the fact is, for each purpose for which we might desire to use a sorghum, there are some traits that make some varieties much better suited than others. Given that, we will try to give some guidance for choosing the best sorghum traits for your desired purpose. Our lineup will change over time, as we are constantly seeking newer and better hybrids, but if you understand the benefits of each trait then it becomes simple to switch from an older hybrid to a newer one with a similar trait package. Here is an introductory of sorghum types and traits.

Forage sorghums are coarse stemmed, long maturity sorghums. Many are high in sugar; historically there were open pollinated varieties called sorgos that were used as a source of syrup, and these have been used as breeding stock for many modern hybrids to enhance palatability. They have poor regrowth but high yield potential if allowed to grow to maturity. They have large seeds that have softer seed coats than sudangrass.

Sorghum-sudans are hybrids between sudangrass and forage sorghum. They are intermediate in most characteristics but also exhibit hybrid vigor, and thus have excellent yield potential.

Brown midrib (BMR) is a naturally occurring mutation that makes plants less able to produce lignin, the indigestible fiber found in plants. Because they contain less indigestible fiber, they are much higher in digestibility and give far better (usually about 30% better) animal performance than non-brown midrib varieties of similar genetics. If a sorghum is to be used for animal feed, a BMR is preferable.

Photoperiod sensitivity (PPS) prevents the sorghum plant from heading out until the nightlength exceeds a certain time period, usually 11 hours and 40 minutes (or daylength drops below 12 hours and 20 minutes). This occurs in mid-September. Heading is undesirable in a plant used for forage, unless the plant is intended for silage. Four things happen when a plant heads out and they are all bad for forage production: first, leaf production stops, second root growth stops, third, the amount of lignin goes up and the plant becomes less digestible, and fourth, water use goes up from 30-50%. By delaying heading, a PPS hybrid will be very high yielding, retain forage quality for a long period of time and be very water efficient.

Brachytic dwarf (BD) is a trait that shortens the internodes on a plant, but actually increases the total number of leaves on a plant. This results in a very leafy, short statured plant with low set growing points.

Dry-stalk (DS) is a trait in which the pith of the plant has less water content than most hybrids, meaning it can dry out faster in a swath than other hybrids of similar stem diameter.

Delayed maturity (DM) is similar to photoperiod sensitivity but does not depend on daylength to function, but rather a large amount of heat units.

Male sterile (MS) hybrids have pollen that is not fertile, and thus cannot self pollinate, and will not produce seed unless pollinated by another sorghum. Although it is often assumed that grain adds quality to a forage, research has shown that as much as half the grain goes through the animal undigested due to the hard seed coat found in sorghum grain. MS hybrids photosynthesize at the same rate as other hybrids after heading, but with no grain to fill, the sugar backs up in the stem. This means that MS hybrids have very sweet and palatable stems, especially if combined with a brown midrib gene. With no heavy grain head at the top, MS hybrids also usually have better standability. MS hybrids are a great choice when it is desired to prevent any chance of volunteer seedlings the next year. MS hybrids should be isolated from other sorghums (including Johnsongrass) for a quarter mile to prevent seed production. 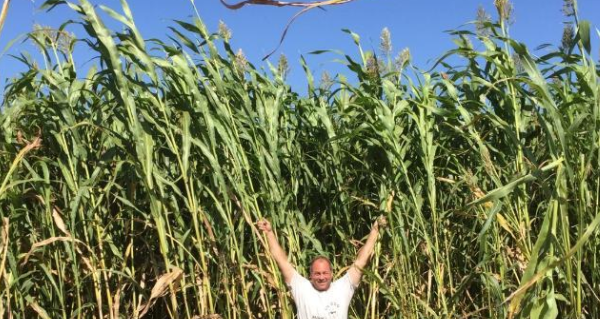 Best sorghum traits for the situation

Desirable traits for summer grazing would be very rapid regrowth and low set growing points (for grazing tolerance), as well as a very high leaf to stem ratio, and high digestibility. The best variety to feature all these traits is a BMR, BD sorghum-sudan.

Desirable traits for hay in a humid area, where multiple cuttings are taken, include high digestibility, rapid regrowth, and rapid drydown. The best variety to feature these traits would be a BMR DS sorghum-sudan.

Desirable traits for hay in more arid areas, where a single large cutting is the usual practice, is to delay heading as long as possible. Traditionally, forage sorghums (cane) planted at high seeding rates (to “skinny up” the stalks due to excessive competition) was the product of choice. Unfortunately, the excessive population also reduced the leaf stem ratio and the resulting high leaf placement often increased risk of nitrate toxicity. However, a BMR PPS sorghum-sudan will actually produce higher yield and be more digestible than traditional products, as well as feature better drought tolerance. With later plantings, DM products may actually head out later than photoperiod sensitives, thus becoming the product of choice later in the season.

For full-season silage, a long maturity BD BMR forage sorghum has been the best combination of price per acre, quality, and yield.

For simple biomass production and cover, conventional sorghums and sorghum-sudans perform just as well as BMRs, and usually (but not always) cost less. Conventional products usually have more persistent residue as well. Most biomass will usually be produced by photoperiod sensitive products or long maturity products, with the least water use. Egyptian wheat (which is actually a sorghum, not a wheat) is a good choice here, as it produces a huge amount of biomass and heads out very late.

For planting with cool-season mixes in late summer and early fall to add additional dry matter to an otherwise “washy” grazing mixture, most all sorghums perform similarly, since they will usually be frost killed before they develop much. In this case, it actually is the best route to use whatever variety or blend is most economical.

For wildlife cover and food in winter, a blend of different maturities, lodging resistance, and heights of grain producing hybrids gives best results. The idea is to have lodging (which deposits the grain on the ground, available to upland birds) occur over a long period of time, so having some varieties that lodge easily and some that stand well spread out grain availability over time. Egyptian wheat is a good basis for food plots, along with a variety of grain and forage sorghum (as well as other species, such as buckwheat and cowpeas). Tall sorghums also provide good deer cover, and deer relish the heads as well.