Plant a cover crop? But I’ll use up all my moisture!

There is an assumption that bare ground efficiently stores the moisture it receives. If this were true, every dirt road in the country would have 300 feet of water sitting on top of them. While a canopy of growing plants does in fact use more moisture than bare ground, the difference is not as great as is commonly assumed. Recent research at Kansas State University indicates that land planted to fall cover crops had approximately 1.5 inches less moisture in November than chemical fallowed wheat stubble. However, this difference had all but disappeared by corn planting time the following April, and by July (when it counts) the cover cropped ground had more moisture.

There are several reasons cover crop use can improve drought tolerance of subsequent crops. The first reason is that cover crops can be used to generate a mulch that improves water infiltration. Many bare soils, even no-till soils, have woeful infiltration rates at the surface, often less than .5 inch per hour. How often do we get rain that comes faster than a half inch an hour? What happens to the rain that comes in excess of that? Unfortunately, it runs off, and tends to result in soil erosion. That same soil with a good mulch may absorb as much as 2 inches per hour. Does that make a difference in a year when the only decent summer rain may have been a 2 incher that came in an hour? The graphs below illustrate how much cover crops can improve infiltration. 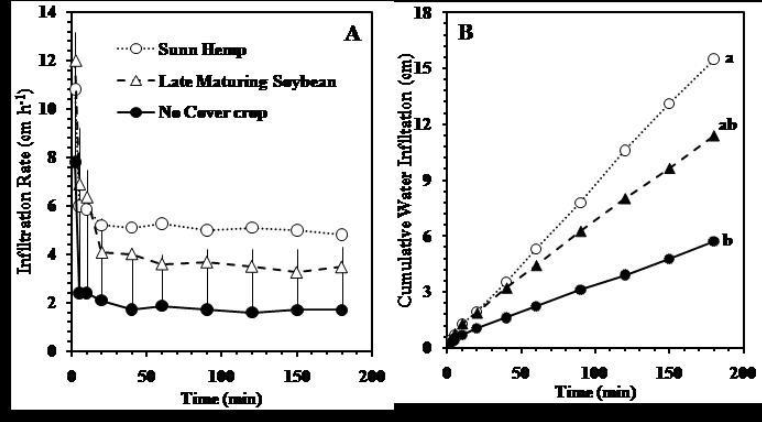 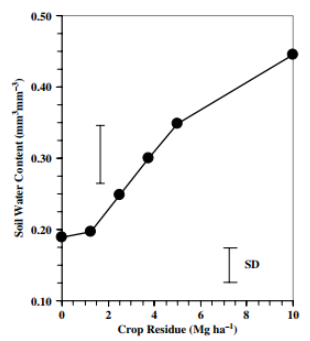 Another value of this mulch is that it reduces evaporation. Research at Kansas State has indicated that a mulch that has more than 75% soil coverage can reduce the evaporation during the growing season of a corn crop by 3 inches of rainfall equivalent. On an annual basis, a good mulch can reduce evaporation by 5 inches of moisture per year. The graph below, from Dr. Humberto Blanco of the University of Nebraska, shows how increasing amounts of residue improve soil moisture.

A common use of cover crops is grazing, and this is encouraged, but if the benefits of a mulch are to be realized, livestock must be removed before the mulch is entirely consumed and bare soil is exposed. It is important to leave a four to six-inch stubble remaining after grazing is finished. This remaining stubble is not wasted feed; it will be composed primarily of stems and will have little nutritional value. All the grazing value is in the leaves of a cover crop. Animals often lose weight on a “stems-only” diet. While excess grazing of a cover crop can eliminate much of the drought tolerance benefit, proper grazing can actually have positive effects on subsequent drought tolerance due to improved microbial biology (see below). 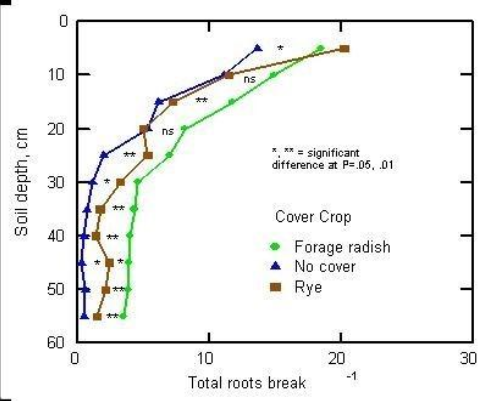 A potential benefit of cover crops may be improved microbial activity. Some of the most important soil organisms for improved drought tolerance are mycorrhizal fungi. These beneficial fungi are capable of colonizing roots and acts like extensions of the roots, sending out filaments called hyphae that extend up to 2 feet past the roots, increasing uptake potential of the root system as much as tenfold. These fungi exist naturally in native ecosystems and are particularly important in prairies, where they are a major reason for the drought tolerance of prairies. Unfortunately, since these fungi need a living root system to survive, these fungi were starved out when we plowed up prairies and converted them into annual crops with long fallow. However, there is now a commercially available inoculant (MycoApply)that contains these highly beneficial fungi available for purchase through Green Cover Seed.

Grazing can improve soil microbiology as well through manure deposition. Manure pats create an ideal environment for soil microbes that improve drought tolerance. The area under and immediately surrounding a manure pat is permanently improved. While only a small fraction of a field is affected by manure pats by grazing a single cover crop, over time more and more of a field gets covered with manure pats. This is a major reason why fields that have been cover cropped and grazed for several years exhibit amazing drought tolerance. The table below, from Dr. Mary Drewnoski of University of Nebraska, demonstrates how long-term grazing of corn stalks improves soil biology compared to ungrazed stalks. 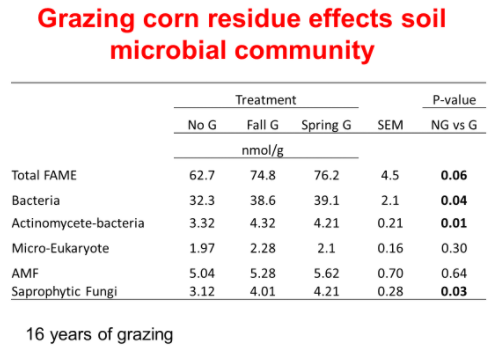 Here’s the summary: Growing cover crops do use moisture, but once terminated by winter or by herbicide, a field that has a cover crop mulch on it will have better infiltration, less evaporation, and better root development on the following crop. In nearly all situations these benefits outweigh the moisture used by the cover itself. The toughest cover crop to grow is usually the very first one. Once the organic mulch layer is established, getting both cover crops and cash crops established in the future is much easier.

These is not theory; these results have been measured and documented. Soil moisture measurements taken at corn planting time have shown little or no difference between cover cropped ground and that not cover cropped. Measurements taken during crop growth usually show an increase in soil moisture due to better mulch coverage. And the most important point: what was the effect on yield? A recent survey of cover crop users revealed that on average there was a 9.6 % increase in corn yields following cover crops, while there was an 11.6% increase in soybean yields. Results were even better in the more drought-ridden areas.

Farmer experience and university research increasingly point out that when cover crops are managed correctly, they do not steal moisture from the following crop, and in reality provide significant benefits in moisture management, all while simultaneously providing nutrient cycling, nitrogen fixation, grazing, erosion control and the other numerous benefits cover crops can provide.