Just a few years ago, the idea of cover crops seemed rather radical to many folks. Planting a crop for the primary purpose of soil improvement was considered a waste of money by most people in agriculture. Over time, however, those who persisted with cover cropping began to notice ever-increasing soil quality that was reflected in higher yielding crops with fewer inputs, along with a whole host of other benefits.  These benefits in soil quality arose partially by better residue cover, but largely due to the additional root mass provided by the cover crops. The roots of the cover crops improved soil aggregation, provided root channels for improved rainfall infiltration, and gave off exudates that fed soil microbiology.

The observation that root mass is a large part of the cover crop benefit has led many innovative farmers to search for plants with much larger and more vigorous root systems than any of our commonly used cover crops, and that has led them to experiment with perennial plants.

It seems like we often have to reinvent the wheel, and this realization that perennial plants improve soil much faster than annuals has had to be “re-discovered” over and over throughout history.  British agriculture authors such as Sir Robert Elliot (he was knighted in the days when you had to make a bigger contribution to society than writing a popular song) in the late 1800’s advocated the rotation of crops with perennial pasture sods, as did George Stapleton and Newman Turner right after World War II. These authors promoted what was called an “herbal ley”, or a short-term perennial pasture composed not just of grasses, but also of nitrogen fixing legumes and mineral-rich forbs, with deep roots to bore holes through compacted plowpans.   For your convenience and further education, the writings of these authors can be found by following this link: Journey to Forever | Online Library 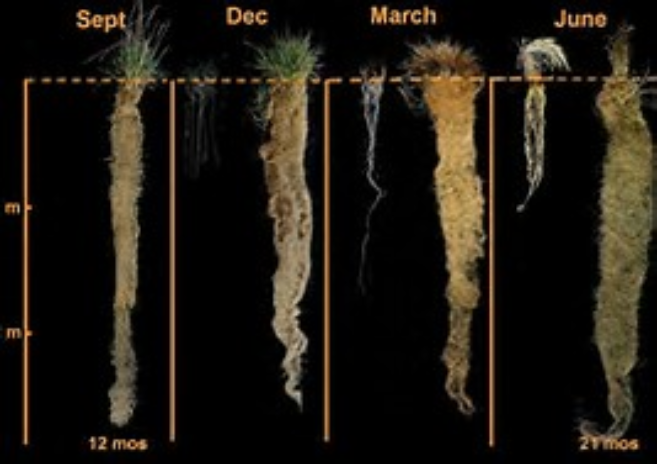 The root system of a perennial plant simply dwarfs that of an annual. Here is a photo from the Land Institute that compares the root systems of wheat (to the left of each month) with that of the closely related intermediate wheatgrass (to the right).

After seeing the vast difference in root systems between annual and perennial plants, does it not make sense that planting a perennial can accomplish far more soil improvement than annual cover crops in the same time frame? There is probably little doubt that this is true, but there is a great hesitancy to plant cropland back to perennials, even among those who greatly desire soil improvement. Why is this so? Listed below are some of the likely reasons for this hesitancy:

There has been very little research on sod-based rotations in the US since World War II. After the advent of cheap nitrogen fertilizer in the 1950’s, it was thought that sod-based rotations were unnecessary to maintain crop yields.  Besides, research on sod-based rotations takes longer than the average tenure of a graduate student, does not fit easily into replicated small plot research if it involves grazing livestock, and does not receive funding from any large agribusinesses.  However, there has been one recent study, conducted in Florida, which compared various cotton and peanut rotations with a rotation of one year peanut, one year cotton, and two years of bahiagrass pasture. Here are the results of that study, measured in terms of peanut yields.

More important was the economic comparison of the rotations. The sod based rotation was from 4 to 27 times as profitable as the others, not only because of higher yields but also because fungicides and nematicides were unnecessary. Nematode pressure was reduced over 90% by including the bahia sod. The income from the pasture more than made up for the loss o fcrop income during those two years. Add all of this up, and (according to their estimates) a family could make a living on 250 acres, where the crop-only rotations required thousands of acres to make a living. Please note, these results were derived from a MONOCULTURE GRASS pasture.  How much better could the results have been if a perennial legume had been included in the pasture, so that the following crop benefitted from nitrogen? What is a deep-rooted forb had been included, to break up the ever-present hard pan? How much better would the animal performance had been with more plant diversity?

Species to consider for sod-based rotations

Eastern gammagrass is probably the top choice, despite its reputation as a slow starter.  Gamagrass has a superior root system to other native grasses, and is simply more productive than any other adapted grass. It also is very shade tolerant, making it possible to establish it as a companion planting with a short season corn or corn silage and cash flow the establishment year. It has a high level of seed dormancy that needs to be broken, either by cold treatment or by a patented treatment called Germtech II.  Planting in midwinter is an effective means of breaking dormancy.  Gamagrass requires inoculation with mycorrhizal fungi for rapid establishment.  Gamagrass is compatible with many legumes, including alfalfa.  Gamagrass requires very careful grazing management in order to be productive.

Native tallgrasses (big bluestem, Indiangrass, switchgrass, little bluestem, sideoats grama) also have a reputation as being slow to establish, but establishment can be greatly enhanced by inoculation with mycorrhizal fungi, with some trials demonstrating as much as a 100 fold increase in first year growth.  Only a few legumes are compatible with native grasses. Native grasses are very drought tolerant and fertilizer efficient, and capable of performing on soil too poor for most other species. This ability to do well on poor soils has been a reason they are often assumed to be nonproductive, because the impression most people have of these grasses is from their production on acres of land too poor to grow anything else.  Given good soil, good fertility, and (most importantly) good management, these grasses are quite productive. Though they can tolerate just about any climatic extreme, they are not tolerant of close continuous grazing, and should be grazed no lower than six inches during the growing season for best results.

Reed canarygrass has a far superior root system to other cool-season grasses, having three to four times the root mass per acre of smooth brome and forming a dense sod. Only low alkaloid varieties should be planted, as wild strains have very poor palatability due to the presence of bitter alkaloids.  Reed canarygrass is slow to establish, and it is often recommended to establish it in alternate rows with a more rapid establishing species like orchardgrass or alfalfa. Planting with tannin containing species like birdsfoot trefoil, sainfoin, and chicory greatly aid animal performance, as the tannins neutralize alkaloids.  Many legumes are compatible with reed canarygrass, though it is a highly competitive grass once established and often eventually forms a monoculture.

Tall fescue is a cool-season grass that has the ability to grow on very poor eroded clay subsoils where other forage species struggle, and forms a dense sod. It also maintains good forage quality in the dead of winter when little else provides quality grazing. Only endophyte free or non-toxic endophyte varieties should be planted.  It is compatible with many legumes and is most often associated with red clover, ladino clover, and Korean lespedeza.

Alfalfa is hands down the most productive legume choice. It has deeper roots, more root mass, more tonnage, and more nitrogen fixation per acre than any other legume adapted to the central US.  However, it can cause bloat and is intolerant of continuous grazing. When combined with other species and rotational grazing, alfalfa can produce more beef per acre than almost any other plant adapted to most of the US.  It is best used in combination with grasses and with tannin containing species, which help control bloat.

Red clover is usually considered the second most productive pasture legume after alfalfa, is much less likely to cause bloat, and is easy to establish by broadcasting. Individual plants only live two or three years so it is necessary to occasionally reseed or manage for long rest periods that allow natural reseeding if it is desired to keep a stand more than three years.

Birdsfoot trefoil is a legume that is only about half as productive as alfalfa but contains tannin that prevents bloat, neutralizes alkaloids, and reduces internal parasites. It is more tolerant of wet soils and acid soils than alfalfa.

Chicory is a forb, rather than a legume, so it does not fix nitrogen.  It is very productive, has very deep roots which impart drought tolerance, grows well in compacted soils, has a very high mineral content, is very palatable and digestible, and contains enough tannin to reduce internal parasites. It is best used in combination with legumes and grasses. Chicory roots are capable of penetrating very dense hardpans.

Plantain is a low growing forb that has some unusual properties, making it very worthwhile to include in pasture seedings. It contains very effective natural antibiotics, which not only reduces disease and infection but also has an effect similar to monensin (Rumensin) in improving feed efficiency by reducing rumen populations of methane-producing microbes.  Like chicory, it is also very high in mineral content and even more capable of penetrating hard, compacted soil layers. Plantain and chicory have been the rock stars in our perennial forage plots at Bladen.

Ladino clover is a low-growing legume that is excellent quality but not very productive in dry weather or drought. Much of its value comes from its ability to spread by stolons (runners) and fill in gaps between other plants. It is very tolerant of grazing and often becomes a dominant species in overgrazed pastures.

Aberlasting hybrid clover is a cross between easy-to-establish (but drought susceptible and unproductive) white clover, and the slow-to-establish (but deep rooted and productive) Caucasian (a.k.a. kura) clover. Initial reports of this new hybrid indicate that it is definitely worth inclusion in a pasture mix.

Orchardgrass is very productive and quick to establish, as well as being compatible with almost any legume or forb.  New varieties are much more drought tolerant than older ones.

Festulolium is a hybrid of ryegrass and meadow fescue. It combines the high quality of ryegrass with the toughness of fescue. It establishes very rapidly, making it an excellent choice for short-term sods. It tends to be very short-lived, usually persisting only two to three years. It is often included in long term pasture mixes with slower establishing species to gain more early production.

Prairie bromegrass (often referred to as Matua, after the most popular variety of this species) is a very rapid establishing grass similar in use to festulolium. It is rather unique in that plants retain palatability and nutritional value after heading, in contrast to most grasses. It is drought tolerant, but short-lived. If allowed to occasionally produce seed, stands can be maintained for a period of time after the original plants die.

Many other species are being explored for their utility in short-term sod-based rotations. It should be obvious from the descriptions that no single plant is ideal for a sod-based rotation by itself.  Therefore, the best approach is usually to plant a diverse blend with many species, but focused on the more productive species like eastern gamagrass for maximum benefit.